In recent years we have discovered a new catalytic system involving high-valent rhenium complexes with terminal heteroatoms as the Lewis base component of Frustrated Lewis Pairs (FLPs). An FLP refers to Lewis acid-base pairs that contain unquenched acidic and basic centers. As shown below this is usually achieved by the incorporation of unfavorable steric interactions in the Lewis acid and/or Lewis base components.

In our new system, rational design of the coordination environment around the Lewis acid and Lewis base components have resulted in a system that allows for precise tuning of catalytic activity. This is an exciting new system that has been applied for the catalytic hydrogenation of olefins. Efforts are currently focussed on developing new catalytic reactions with other small molecules such as carbon dioxide and nitrogen. 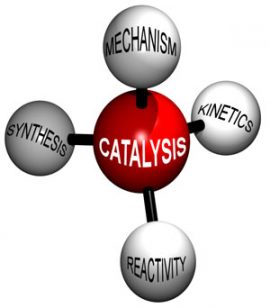